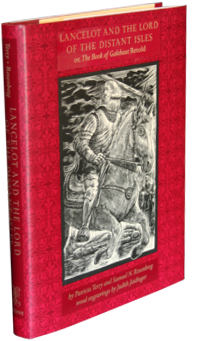 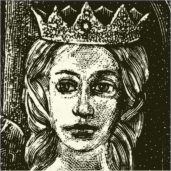 It was said of Queen Guenevere that everyone who came into her presence was ennobled. This can be taken as simply another way of saying that she was supremely beautiful; certainly there is no indication in the Prose Lancelot, the chief source of our retelling, that her influence led to any nobility of action. Her marriage to King Arthur must have had more than politics to recommend it, but by the time Lancelot arrived at court, whatever love Arthur may have had for his wife was reduced to ceremony. He was easily tempted to seek pleasure elsewhere, and the military glory of his kingdom was so reduced that the realm could easily have been conquered by his ambitious foe Galehaut. Guenevere was notably younger than her husband, and notably older than Lancelot

She was a famous queen, accustomed to homage, surrounded by admirers. When she realized that Lancelot had accomplished all his remarkable feats in the belief that her formulaic word of farewell had been meaningful, she clearly had difficulty hiding her amusement. The terror Lancelot felt at the mere thought of approaching her—had she perceived it—could have struck her as natural, or simply childish, certainly not seductive. But Galehaut makes her see Lancelot as the Black Knight, the peerless warrior, and, pretending that this hero is far away, makes her increasingly impatient to see him. Thus he leads her to accept the knight's love, asking only that she not disrupt the friendship between Lancelot and himself. Expediency, however, makes her do just that, later on.

In Marion Zimmer Bradley's The Mists of Avalon (1982) Guenevere has a fanatical zeal for Christianity. Nothing in the Prose Lancelot or in our retelling of the story suggests such an orientation. On the contrary, Guenevere is more than willing to accept the friendship and advice of the implicitly pagan Lady of the Lake, including her gift of a split shield magically made whole when she and Lancelot consummate their adulterous love.

At the very end of the tale, when Arthur is dead, Lancelot dying, and Guenevere herself confined to a convent, she seems at last to achieve a balanced understanding, of her circumstances, although even here she does not take full responsibility for her part in the crumbling of the Arthurian kingdom. As she says in Lancelot and the Lord of the Distant Isles:

"Always Arthur feared that, were it not for Lancelot, his enemies would overwhelm him. He forced me to have Lancelot remain at court when I knew that it would be wrong for him to do so. Many times Arthur betrayed me, and his loves endangered the realm. My love was its protection, although there was no way to save it in the end" (p. 222).